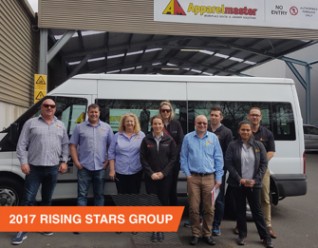 The 2018 Apparelmaster Rising Stars Study Tour has kicked off and is focused on providing an opportunity to deserving talent and future leaders in our group. We run the programme to give our emerging talent the chance to spend valuable time at Apparelmaster head office, a number of Apparelmaster plants, and a couple of our workwear suppliers. It will allow the participants to gain a better understanding of the Apparelmaster group culture, the opportunities available and the wider resources they can draw upon to assist them in their day to day roles. The tour will also help them build on their current skills and knowledge and share their learnings with others in their plant on their return. The participants will also have the opportunity to bring back to their team an enthusiasm for continued improvement and implement some positive changes as a result.

The Rising Stars Tour begins at Apparelmaster Head Office in Wellington and includes a session around culture and leadership with Mike Clark of ThinkRight. This is followed with visits to Argyle Performance Workwear in Hawera and La Nuova Apparelmaster in New Plymouth, Rotorua Apparelmaster, Sincerity Apparelmaster in Matamata and Apparelmaster Waikato in Hamilton. The tour ends up in Auckland after a visit to Workwear Group and Pryors Apparelmaster.

This year we are pleased to have Filterfab on board as a supporter of the Apparelmaster Rising Stars Study Tour. Filterfab as a company is inspired by the Apparelmaster Group and the people that make up the business and they like to see enthusiastic and motivated individuals being given the chance to broaden their industry knowledge.

This year’s participants cover a range of roles from Customer Service, Sales Representatives, Production Manager, Drivers and are coming from all over New Zealand. The participants include:

“The key to learning & success is the willingness to try something new, and feel momentarily incompetent.” - Seth Godin