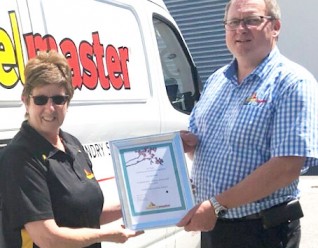 When Lois Marshall started working with Keith and Barbara Pickford in September 1993, little did she know her Wrights Drycleaning career would span 25 years – maybe more! As she celebrates her 25th year with Wrights Drycleaners Limited, Lois certainly has a few stories up her sleeves.

One that has stuck with her through the years was one she heard from the great man himself, the late Bill Ritchie. It involved a certain business, a certain driver, and a certain enterprising fellow who’s opportunistic entrepreneurialism lead him to a thriving side hustle selling stolen mats from the Apparelmaster van. The fellow in question had been waiting until the Apparelmaster driver headed into the business with his delivery of mats, grabbing a few mats from the unattended van, and selling them off to his mates. Cheeky doesn’t seem to cover this guy’s audacity!

Another goody might not seem so funny if you happen to have a dreaded fear of mice, which Lois absolutely does! There’s nothing more likely to cause a fright like emptying a client’s laundry bag of overalls to have a mouse leap out at you. Ah, the stories Lois could tell…

Lois’ first role within the business was in the washroom. These were the days when cards were inserted for each wash programme and detergent had to be manually added. She then added doing deliveries to Timaru, Methven and Rakaia to her role whilst also getting an understanding of local deliveries so she could fill in there when needed. In 2003 when Stuart and Neroli Cross bought the business, Lois added even more skills to her already impressive repertoire. In 2007 she became a full time driver so Stuart could focus on the plans for the new plant construction. In October 2008 when the new plant was complete, Lois turned her steady and experienced hand to a full time role in customer service. This role has seen her deal with a large and diverse range of customers, all of which she thoroughly enjoys. Interaction with customers and being at the frontline of the business is something that Lois relishes, though she still really loves getting stuck into any role in any area of the plant where needed. There’s not many things Lois doesn’t know about the Apparelmaster business and its products and offerings.

At the end of the day, the best part of working for Wrights Drycleaners Apparelmaster has been, and still is, the people. “I have met some really great people while working here. I still have a great rapport with a lot of our original customers, who remain loyal customers today.” Great customers are just a part of it – the Apparelmaster team has been a great support throughout the years, especially Bill Ritchie. Bill was a valued teacher during Lois’ early years. “Every time he visited there was some great new yarns and new ways of doing things.”

The Apparelmaster Group inspires amazing loyalty from its teams all over New Zealand and Lois is thankful for the amazing team environment. The team at Wrights Apparelmaster are just as thankful to have Lois and we all wish her well and a speedy recovery from her knee operation and hope she’ll be back on deck soon! Thank you Lois – you’re a star!