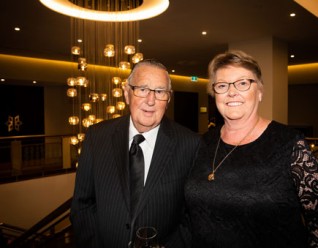 A Tribute to Bill Ritchie

It’s easy to see that Bill Ritchie was a man, not only admired and respected, but truly loved by the people who worked with him over his 40 years with Apparelmaster. He was a dearly loved father of three, a wonderful husband to Inez, and Grandad Bill to his 10 grandchildren. He was also a man of vision, ethics, commitment, and innovation.

Back in the early days, when Bill’s business, Ritchie Heat Limited maintained the boilers and plants for John Talyors Taylor Brothers Drycleaning, a near-death experience would change the way New Zealand was covered at work. Falling into a tank of boiling water at a competitor’s plant, Bill’s long period of recovery led him to becoming a dear friend and partner of John Taylor.

In 1978 John brought the American-based Apparelmaster brand to New Zealand and together the two would build an empire of Apparelmaster franchises across the entire country, proudly keeping the business NZ owned and operated. Run by on-the-ground locals who understand their customers needs intrinsically, and supported by national resources and infrastructure, Bill and John have created one of New Zealand’s most successful business models that really works for everyone involved.

Bill was the kind of man who got amongst it. Not only would you see Bill turning up at a prospective plant with his trusty drawing board in the boot of his car. In all of the original plants and some of the newer ones today, Bill personally built the overhead assembly rails and storage systems. He also went out selling with the new licensees (who in most cases hadn’t sold a thing in their lives) and many of those first customers are still customers 40 years later. He was known to be a great man of the community, supporting the Petone Lions Club as a young man and in later years assisting with the administration of the Waikanae Lions club. He was a long-standing committee member of Fishing for Youth through the Waikanae Boating Club where he was a well-respected member, this year winning the ‘personality of year award’, something he was extremely proud of in his final weeks.

The fact that both the very first customer, Edwards Panel and Paint in Rongotai, and the very first licensee, Sincerity Drycleaners Apparelmaster in Matamata, are still a customer and a Licensee, is testament to the commitment and integrity, the support and camaraderie, and the good old-fashioned business sense of a company that truly reflects the man who built it.

Here’s to you, Bill – you are missed, will always be missed, and may your legacy continue to keep New Zealand covered at work with the same determination, innovation, integrity, and vision you instilled into it all those years ago. To Bill.