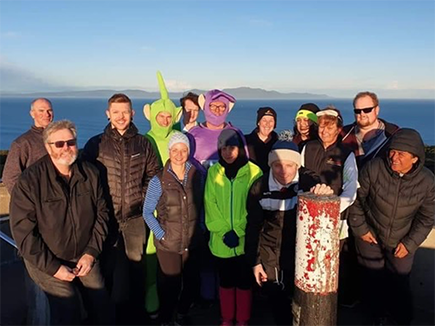 The Rising Stars annual tour is a week of opportunity and learning for up to eleven hard-working, passionate employees of Apparelmaster branches nationwide. This dedicated group of people are the nominees for the annual Rising Star Award, which will be presented at the next conference in Fiji in 2020. Pretty exciting stuff!

The nominees were flown down (or up) to travel along the East Coast of the South Island, to experience workshops, sessions, activities and networking to inspire and encourage them to unleash their leadership capabilities and potential. Before they hit the road, they participated in a closed group on social media to introduce themselves and complete weekly tasks so that by the time they met in person they had already formed somewhat of a bond.

Our key supporter this year, Filterfab, sees the people of Apparelmaster as huge inspiration. Watching them grow their industry knowledge, seeing their passion for the business, and seeing how they respond to the experience are just some of the reasons Filterfab came back to support the Rising Stars Tour for the second year running.

This year, eleven incredible employees embarked on the Rising Star tour alongside the Apparelmaster Group’s Managing Director, Bevan Ritchie, who was the designated Rising Stars Tour van driver. Being on the road with the leader of your organisation is not something many employees get to experience. The Rising Stars programme has demonstrated the positive effects this has on company culture by breaking down traditional barriers between top management and those on the ground floor. It nurtures the opportunity to build valuable networks throughout the country and gives participants an appreciation of how they are part of something much bigger than their own local team.

So, what makes a Rising Star? Nominated by their managers, an Apparelmaster Rising Star is a dedicated, passionate team member who is eager to learn, loves their work, and shows leadership qualities, even just by turning up every day with a smile and a good word for their team mates. The tour is a chance to celebrate deserving talent and future leaders, and to help them grow – and of course – to shine!

We want to say a heartfelt congratulations to all of our 2019 Rising Stars! You guys rock!

Across the five days, the group ventured across the South Island, starting in Christchurch, and ending in Invercargill. The tour began with motivational sessions about leadership and teamwork with business training expert, Mike Clark from ThinkRight, which helped to establish what the tour was about - celebrating achievements, encouraging growth mindsets, and leadership. Over the week, while completing daily tasks set via social media, the group visited South Island plants; Apparelmaster Christchurch, Wrights Apparelmaster in Ashburton, Target Apparelmaster in Timaru, Preens Apparelmaster in Dunedin, Gore and Oamaru as well as McCallums Apparelmaster in Invercargill.  Throughout the tour, the Rising Stars developed and built their network within the Apparelmaster Group and discovered processes and ideas to bring back to their own plant to help their team and business grow.

Of course, we managed to squeeze in a bit of down time…delectable dinners and just a few drinks helped break down barriers and nurture bonds that we know will last! And, on the last day of the tour, we even decided to pay a visit to the stadium, get on some gear and climb some rock walls. This was a great experience where the whole group climbed right outside of their comfort zones, supported each other and, most importantly, had a whole lot of fun! Don’t forget – what goes on tour, stays on tour!

"I wasn't sure why I was nominated.  I didn’t think I was a leader.  I’m starting to think I can be."
Dispatch and Route Assembly Star, Horiana Nepia, Apparelmaster Whangerei

Really – this just sums up perfectly what our Rising Stars tour is all about, identifying our Rising Stars and investing in helping them find their potential. The Rising Stars tour 2019 was a huge success and the Apparelmaster Group is proud of the amazingly ambitious group of deserving talent. We’re excited to track their progress and see how they can bring all the learnings from the tour back into their workplace and share with their team. And, of course, we can’t wait to see who the recipient of our Rising Star Award will be! Bring on 2020!