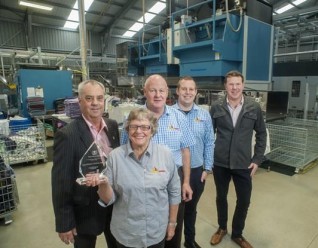 Apparelmaster Waikato Rises from the Ashes

17 July 2014 is a date that will be etched in Rae and Warren Massey’s mind forever. It was a typical day at the workwear rental and laundry business they run with their son Clark. Rae was the last person to leave the plant that night just before 6pm. Before going, she did her usual checks and made sure that everything was switched off. She noticed a slightly unpleasant smell, and set about detecting where it was coming from. Having been in the laundry business for many years, Rae knew all too well the dangers of fire which are inherent in the industry.

After sending messages to key staff to ask if they had noticed anything untoward at the plant, Rae locked up for the evening, and went to meet friends at the end of another working day.

By 7.15 pm that same evening, Rae had been called by an employee who informed her the site was on fire. Rae says, “By this stage, there wasn’t much I could do but stand on the side of the road watching the building go up in flames. It was soul destroying and devastating, but thank goodness no-one was inside when it happened.”

The fire took hold on an internal wall in the sewing machine room. The building structure buckled under the heat, and flames tore through the roof. The cause of the fire was later determined to be a faulty multiplug.

By the following morning, the damage was clear to see. The heat and smoke had released toxic fumes, and the factory was beyond salvaging.

While staff were visibly upset about the damage and were concerned about their livelihoods, Rae, Warren and Clark worried about how they were going to keep the business going in the face of such adversity.

Rae comments, “We had the most awful three-week period waiting to find out if the insurance company was going to pay out on the policy. In the meantime, we had to arrange for the gas and electricity to be cut off, a security guard to watch over the plant, and then we needed to start preparing for the claim.

However, the most important thing was to keep the business operating by providing our regular service to customers.”

Rae got in touch with her Apparelmaster colleagues to ask for help and found that Brett Homan at Auckland Pryors Apparelmaster was only too happy to assist. Rae recalls, “Brett and his team were an absolute Godsend. Thankfully our fleet of vehicles were undamaged, and so we were able to deliver dirty garments to Pryors Apparelmaster, and make our usual delivery runs to customers. We even had some of our staff working from Brett’s plant.”

While customers were understanding, Rae knew that she had a window of 6-8 weeks to make sure it was business as usual for them. Fortunately, a friend had just bought a building nearby that was unoccupied, so they set up a temporary office there, co-ordinating deliveries and sorting orders. At the beginning, the whole business was being run from Rae’s mobile phone.

Thankfully, the business was fully insured, but this had only happened 18 months prior to the fire. Rae explains, “We weren’t very happy with our insurance broker, and had been talking about it at a barbeque with friends. Someone mentioned they knew a person who could help, which is how we were introduced to Rene Swindley from Frank Risk Management.”

Rene undertook a comprehensive insurance audit of the business and found that the Massey’s were woefully underinsured. Rae was surprised to hear this is increasingly common amongst New Zealand businesses, and set about taking out a new policy. This undoubtedly saved the Apparelmaster Waikato business.

When it came to progressing the claim, Rene Swindley put Rae in touch with Tony Howie at intermediary firm the LMI Group, known for claims handling, client advocacy and negotiation. Crucially, Rene was able to structure the business interruption insurance cover so that the insurance company had to pay LMI’s costs.

Tony Howie worked with Rae to negotiate a settlement with the insurance company, he says, “The best bit of advice I can give to anyone in these sort of circumstances is ring the fire department first, and us second. Time and again we see insurance companies failing to pay out the entitled amount to businesses who have lost everything like Rae, Warren and Clark Massey.”

As the rebuild loomed the Massey’s seized the opportunity to reinvest in technology and upgrade the capability of the plant and equipment, even though insurance covers were not finalised. With Tony’s help, the insurance company paid out what they were obligated to under the various policies.

Finally, nearly a year after the fire, the Massey’s opened a new plant which was built on the remaining concrete slab of the old site. Rae says, “It was an incredibly tough year for us as a family, and we couldn’t have got through it without the help and support of the Apparelmaster Group, Frank Risk Management and the LMI Group.

Since the fire, we have invested in Bonpet technology which shoots out foam if sensors register a temperature over 90 C°. Every single multiplug on site is also regularly tested to ensure it meets requirements.”

Tony Howie from the LMI Group concludes, “According to our research, only one in every two businesses that experiences a situation like Apparelmaster Waikato survives. This is why we have created the Phoenix Award which is given to businesses that are still going strong two years after a disaster. We were delighted to present this award to Rae, Warren and Clark earlier this month.”

Since the fire at Waikato, Apparelmaster Group head office has stipulated that every member of the Group must have an up-to-date risk management and emergency response plan in place for eventualities such as fires and earthquakes.