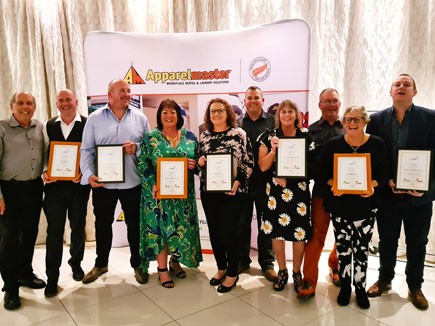 The 42nd Annual Apparelmaster Conference Award Winners are as follows:

Sales Award – Master Valet Apparelmaster, Nelson (for the second year in a row)

A huge congratulations to all! Monumental effort and very much deserved!

Awards night wouldn’t be complete without the awards from sustainability partner, Instep. Running an environmentally sustainable business is a key component of the Apparelmaster Group ethos. This year the group demonstrated, yet again, its commitment to sustainable innovation with fierce competition for the Instep Sustainability Awards.

Of course, on the night, there could only be 7 winners.

The Apparelmaster Group has been working with Instep since 2009. Many of them have actively engaged with Instep to significantly reduce their carbon footprint and CO2 emissions.

Instep is a sustainability programme that supports and prompts businesses to meet annual carbon emission reduction targets through taking daily actions that are more sustainable and environmentally aware. Developed by scientists, Instep tailors their programmes to meet both the planet and the [delete ‘organisation’s] business requirements.