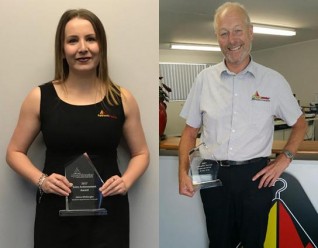 Sales and Service Always a Winner

Two of the most coveted awards were up for grabs at the Apparelmaster annual conference, held at Rydges Hotel in Auckland recently. Business owners, managers and team members from all over Apparelmaster New Zealand waited on tenterhooks to hear who had won the Customer Service Representative and Sales Person of the Year gongs.

Customer service is critical to most organisations and Apparelmaster is no exception. The Group has many standout performers, so selecting a winner was not an easy task.

This year’s Customer Service Representative award was presented to Grant Lambert from Apparelmaster Whangarei. Bevan Ritchie Managing Director of Apparelmaster and one of the judges said, “Grant epitomises everything that makes Apparelmaster great and his warmth, kindness and ‘can do’ attitude has had a huge, positive effect on the team in Whangarei as well as the Group overall. Nothing is too much trouble for Grant, and when you give him a task, you can consider it done.”

The Sales Person of the Year award was given to Jaime McNaught from McCallum’s Apparelmaster in Invercargill. Talking about Jaime’s success Bevan Ritchie commented, “Just like service, sales is the life blood of the Apparelmaster Group. Without sales, we stagnate and go backwards.

Since joining the Group, Jaime has been a breath of fresh air and although she has only been with us for a relatively short time, her impact has been huge.”

Jaime has settled in quickly at McCallum’s Apparelmaster, getting involved in all aspects of the business and driving sales.

With a network of 28 branches throughout New Zealand from Kaipara to Invercargill, Apparelmaster prides itself on the fact each one is locally owned and operated and that we have exceptional people like Grant and Jaime, on the ground to ensure our customers are getting the very best products and service.