HOME NEWS
Supporting the Steel On Court and Off 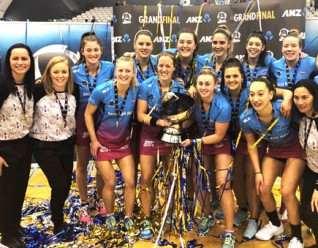 Supporting the Steel On Court and Off

The team at McCallums Apparelmaster Group were cheering loud and proud as the Ascot Park Hotel Southern Steel claimed its second consecutive ANZ Premiership netball title this year in Invercargill.

The southern team produced a stunning come-from-behind victory to win the national title, beating the Central Pulse 54-53 in what was captain Wendy Frew’s last game for the franchise.

McCallums Apparelmaster of Invercargill has been a proud supporter of southern netball for close to 20 years, sponsoring Southern Sting since its inception in 1998, and continuing that support of Southern Steel for the past 11 seasons.

“Year after year, this team goes out there on court with real southern values of dedication and teamwork. To get the win in such dramatic fashion just shows their ability to never give up and to believe in each other. That epitomises a really special team, and we are so proud of the girls,” he said.

“The final was one for the history books, and as a locally owned and operated business McCallums Apparelmaster is thrilled to be behind such a great team. They put Southland on the map for all the right reasons.”

“McCallums have been an integral part of our team for the past 11 seasons,” said Southern Steel Marketing and Communication Manager Kate Buchanan.

“They have supported our southern franchise from the inception of the Sting in 1998. It’s a longstanding partnership and we value their incredible and unwavering support so much.”

“They do so much for us – everything from providing the towels to wipe the sweat off players to alternations to our uniforms each season.”